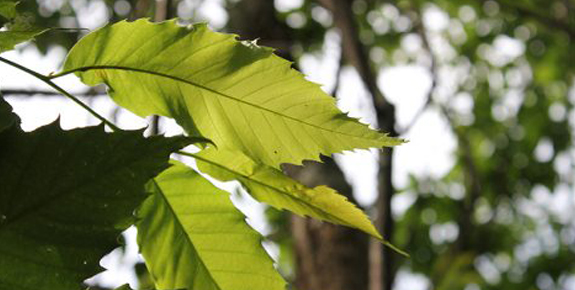 When is the last time you have seen an American chestnut tree? Chances are, the answer is probably “never.”  If we were to view the relevance of this species through the lens of American culture, we would believe chestnuts are almost everywhere.  We roast them over an open fire around Christmas and enjoy sipping our chestnut praline lattes at Starbucks in the fall.  We name our streets, schools and even entire towns after chestnuts, but when was the last time you have stopped to consider the origin of these chestnuts?

For as long as we have kept record of our forest’s composition, the American Chestnut tree was one of the most prolific and abundant trees in the eastern forests of the United States.  In the early 20th century it is believed that 1 out of every 4 trees in the Appalachian Mountains was an American Chestnut.  An important nut crop, it was used in soups, breads, porridge, and pies.  At times reaching over 100 feet tall, the tree supported a variety of wildlife, including the now-extinct passenger pigeon.  It also served commercial purposes, being one of the fastest growing lumber trees with highly desirable rot-resistant wood.

Unfortunately, the American Chestnut is no longer common today. The chestnuts enjoyed during the holidays are European Chestnuts from the Castanea sativa, not the richer and sweeter American Chestnut.  So what happened?  How did one of the most beloved and prosperous trees in the United States disappear within a few decades? 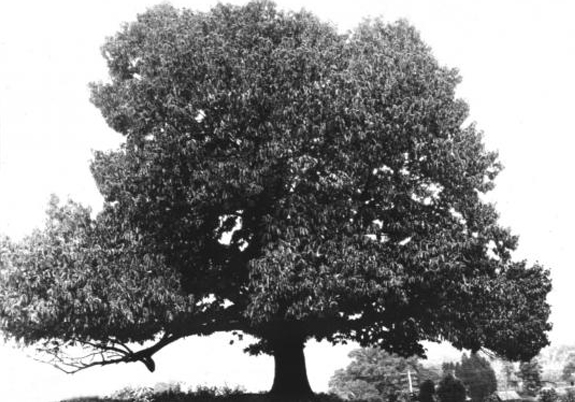 One of the Worst Ecological Disasters of the 20th Century

Beginning in the early 1900s, American Chestnuts were devastated by chestnut blight – a disease caused by the Asian fungus, Cryphonectria parasitica.  Like many other invasive species (see our post on the Spotted Lantern Fly) the fungus was accidentally brought to the United States, probably through imported Asian Chestnut trees.  Shortly after the fungi’s arrival it spread rapidly, devastating billions of American chestnut trees.  The loss of this species irrefutably changed the structure of our forests.

Can Anything be Done?

The American Chestnut species was devastated by the fungus, yet, the species has not been completely eradicated from our earth.  Life can still be found in the roots of the American Chestnuts.  The roots readily send up new shoots from their root system, which seems hopeful, until soon after the young saplings begin to grow, they are once again taken out by the blight.  Researchers have been diligently studying and experimenting with methods of how to bring back the beloved species. 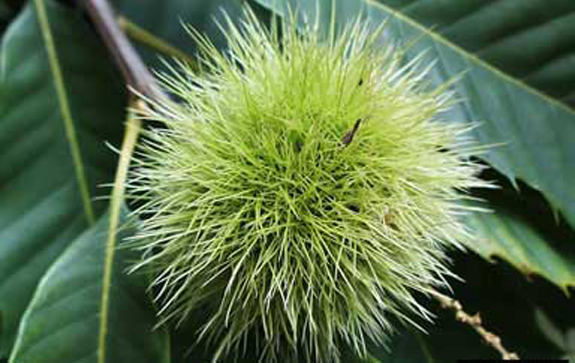 The State University of New York’s College of Environmental Science and Forestry (SUNY-ESF) has been researching ways to use genetic engineering techniques to produce transgenic trees.  What does transgenic mean, you ask?  (Don’t worry- we had to look it up, too.)  A transgenic species is one in which DNA from another species has been artificially introduced.  The SUNY program has been using the American chestnut genome found in young saplings and manipulated the DNA with a fungus-fighting compound that is found in wheat.  The result?  A blight-resistant, American chestnut tree with delicious fruit.  More research needs to be done on the longevity of this tree, it’s potential to spread, nutrient content of nuts, and its productivity in ecosystems where it has been absent for almost 100 years.

From the efforts of many people and organizations we may someday soon see American Chestnuts commonly grown and get to taste the sweet fruit of this iconic species!