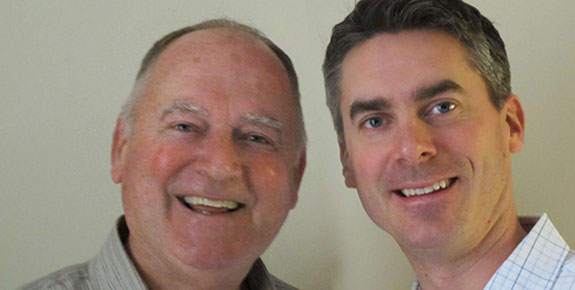 This year’s Flower Show, “Brilliant!,” was inspired by the majestic beauty of the gardens of Great Britian, which in turn inspired Stoney Bank’s owner Jack Blandy to build his own interpretation of Hidcote Manor Gardens, an example of incorporating formal plantings in natural groupings.

“Hidcote Manor really settled the dispute between the naturalistic and formal debate,” Blandy said about the unique setting of Hidcote that one would find if they took an excursion out of London to the verdant Cotswolds in southwest England where Hidcote is located.

When the opportunity presented itself to showcase a British garden at Brilliant!, Blandy said he remembered how he “loved this place and the arts and crafts period of landscaping” and decided, “gee, I’d like to create our vision.”

So Blandy said he and the Stoney Bank’s crew toyed around with a number of ideas before coming up with Hidcote Holiday.

This year will mark Stoney Banks’s 34th exhibit at the Flower Show as it hopes to capture a few awards at Brilliant!, the edgy name that reflects the Brits’ term for inventive, dazzling and extraordinary.

This week, the Stoney Banks’ crew is on the exhibitors’ floor at the Flower Show at Pennsylvania Convention Center, 1101 Arch St. in Philadelphia building a gazebo and strategically placing plants from its greenhouses in the exhibit.

“This particular garden I think the public will really enjoy,” Blandy said, noting that the exhibit will showcase elegant roses and colorful perennials that will grace the walkways and garden “rooms” defined by formal boxwood hedges.

The original Hidcote Manor Gardens was created by Major Lawrence Johnston, one of England’s leading plantsmen.

As part of the Arts and Crafts movement, Hidcote Gardens is an example of formal perennial plants grown in informal natural groupings. Johnson did that by making boxwood-edged “rooms” divided by paths and topiary pillars of clipped yews and boxwood, thus settling the dispute between naturalists and formal garden settings.

Hidcote has the many little openings that beckon the visitor, leading through hedges and down narrow paths to reveal beautifully composed garden pictures.

The first time Blandy saw Hidcote Gardens was more than a decade ago when the Blandys’ daughter was attending the University of Edinburgh in Scotland.

On the way to see their daughter, the couple swung by Hidcote, but the impressive landmark gardens were closed due to preparations for a special visit from a high ranking official.

Later, the Blandys took time out from their visit with their daughter to circle around to see the gardens. Again, it was closed.

Blandy said the crew at Hidcote wanted to know why the Philadelphia couple was so interested in the gardens that they would go out of their way twice. When Blandy explained that he ran and his wife ran a landscape design business, they opened up Hidcote just for them and were given a one-on-one tour of the magnificent country gardens. No crowds to contend with, just Blandy and his wife, he remembered.

For example, be on the lookout for the particularly impressive 300 to 400 delphiniums, some 6 feet high, along with day lilies and bearded irises.

“I’m pretty excited,” Blandy said about the exhibit that is running up the company’s utility tab and other expenses to $150,000.

“I don’t want to look at our heating bill or electricity bill,” Blandy said. “(Staff) pamper them around the clock.”

To get these specific plants to bloom at the right time takes more than skill, the landscaper continued, it takes forcing to “a whole new level.”

In the months leading up to the Flower Show, Stoney Bank, a 24-acre landscape design nursery, had eight greenhouses packed with plants, both for his exhibit and for other exhibitors.

For Stoney Bank, the effort and expense is worth it, Blandy said. “It helps to build our company.”

Proceeds from the Flower Show benefit the year-round programs of Pennsylvania Horticulture Society, which is celebrating its 185th year of gardening and learning.

The show debuts Saturday and ends March 10. It takes place at the Pennsylvania Convention Center, 1101 Arch St. in Philadelphia.

This year the event adds an extra Saturday. Extending its run will increase its economic impact on the region, the horticultural society said. In 2012, the flower show generated $61 million in spending at hotels, restaurants and related venues.